The United Society of Believers in Christ’s Second Appearing were known to “the world” as Shakers.

A small religious sect that came to America from England in the late 18th century to escape religious persecution, they were led by a woman, Ann Lee, whom they believed was the second coming of Jesus Christ. The first settlement was in Watervliet, NY and later on 18 more communities were formed mostly in the East, but extending as far west as Kentucky and Ohio.

By the mid-19th century, there were approximately 6,000 men and women who lived as Believers, practicing celibacy, pacifism, equality of the sexes and living as simple a life as possible, putting their “Hands to work and hearts to God”.

While their spirituality was of high importance, in order to remain self-sufficieny they farmed their land and produced goods for sale to the outside world as a form of income. They were known for high quality garden seeds, herbs, tinctures and remedies, furniture, house wares, preserved foods and candy, bonnets, cloaks and fancy hand sewn goods. Everything made, be it for them or the world, was of the highest standard as work was a form of worship. Everything was to be simple and functional and extravagance and elaborate decoration was looked down upon.

“Where there is no order, there is no God” was a cornerstone belief and all work was considered of equal importance, no matter how lowly the task.

Society members were allowed personal possessions, but upon entering the communal order, most belongings and property were given over to the community. Of course in those days most possessions were integral to day- to- day living such as tools, farm equipment, livestock and some home goods. The Shakers embraced the premise of working smarter not harder and if there wasn’t a tool or a trick to get the job done, they invented one such as the flat broom, an early clothes washing machine and held patents on a number of designs and products.

Unlike the Amish, Shakers embraced technology and advancement in the work place. Workshops were neat and tidy, like the rest of every Shaker village, with tool boxes, cabinets and work benches where tools were cleaned and put away at the end of each work day. Large numbered cupboards where garden seeds were kept were well labeled, journals were kept about everything that went on in the dye house, sewing desks were built with lots of little drawers for all of the scissors, needles and bobbins and ice was cut and stored in orderly squares or rectangles to fit snuggly into the ice house.

I developed a deep interest in the Shakers when I worked at some of the local Shaker Museums and sites in my younger years, such as when I was a demonstrative cook and interpreter at Hancock Shaker Village. As someone who believes that clean and tidy is essential to a productive workspace, seeing how the Shakers had built their homes, workshops and farms impressed me immediately. It’s easy to admire furniture that was built to last with simple lines, chairs that are lightweight and easy to hang upside on the famous peg rail so it’s easy to sweep or better yet, drawers built directly into the wall therefore not allowing dust to settle as it would on the top of bureau. Kitchens were state of the art: vast kettles with fireboxes built underneath them, huge ovens with rotating racks inside, running water in the 1830’s and lots of windows to allow natural light.

It’s not just the physical and material aspects that were kept orderly, the communities themselves were overseen by the Central Ministry at Mount Lebanon and each village was guided by ministry leaders. Precise and dedicated journal and bookkeeping helped Trustees to manage the financial aspects of each village and has allowed us to learn a tremendous amount about all sorts of matters – some temporal, some spiritual.
In the later portion of the 20th century, as the Victorian Era was in full swing, some Shaker villages loosened up their plain and simple guidelines somewhat and even some buildings were updated with some Victorian flair. I can imagine some Sisters might have been less than enthusiastic about trying to clean around bulky, overstuffed arm chairs and heavy, tasseled window curtains. Membership had been in decline for many years and some aspects of the villages that had not already closed were looking a bit rough around the edges, sadly dilapidated.

With the industrial revolution and western expansion, few people were interested in living a deeply spiritual, celibate, communal way of life. Other Utopian societies such as the Oneida colonists had failed and even though the Shakers continued to take in orphaned children, many of them left to seek their fortunes in the world. Today just one village remains with just a few members at Sabbathday Lake, Maine but their legacy is carried on by the numerous museums which were once original Shaker communities. 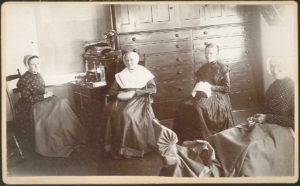 I have embraced so many of their philosophies and dictums, but the one you’ve probably heard more than any other comes from a song “ ‘Tis the gift to be simple, ‘tis the gift to be free “ – an idea for us all to contemplate, minimalist or not.


Minding Your Manor respects your privacy. We will never share or sell your address and you can unsubscribe at any time.